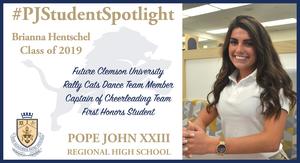 Hentschel is a senior who has demonstrated her wide variety of talents while at Pope John.

We at Pope John XXIII Regional High School want to share with you a new series called “Pope John Student Spotlight” in which we recognize our students’ talents and achievements! Today, we want to showcase Brianna Hentschel!

Hentschel is a senior who has demonstrated her wide variety of talents while at Pope John. She has recently earned a spot on Clemson University’s Rally Cats dance team after going through a rigorous multi-day audition in which she had to perform technical skills in addition to jazz, hip hop and pom routines. Hentschel has been a four-year member and captain of Pope John cheerleading team, which she helped win two consecutive first-place trophies in the Xtreme Routine at the Universal Cheerleading Association summer camp at Pine Forest. Hentschel is also a three-time UCA All-American for cheerleading. In addition, Hentschel has earned First Honors in the classroom while taking courses such as Anatomy/Physiology, Statistics, Honors Women Chorus, History of Great Trials and Psychology/Sociology. Hentschel is also a member of the Honors Chorus, a statistician for the wrestling team, and a dancer for the Performing Arts Academy in Pompton Lakes.