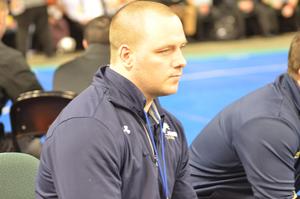 Alpaugh is the Lions’ eighth head coach in program history after serving as an assistant coach for the past five seasons.

Alpaugh is the Lions’ eighth head coach in program history and will take over the reins for Mark Piotrowsky, who stepped down following his sixth season at the helm. For the last five seasons, Alpaugh served as an assistant coach under Piotrowsky, who led the Lions to an 83-30 record during his tenure.

“I’m super excited for the opportunity,” Alpaugh said. “Pope John has done well over the last few years. This seemed like the right situation for me. I’m ready to start getting to work.”

“This is an exciting new chapter for our wrestling program,” Pope John Athletic Director Mia Gavan said. “Pope John wrestling has been extremely fortunate to have Austin, with all his talents, working with our athletes on the mats these past few years. He has been an integral part in the rise and success of the program and we know that success will continue with him at the helm.”

Alpaugh will take over a Lions’ program that he has helped win back-to-back Non-Public, North B championships and compete in two straight Non-Public B finals. The Lions captured the Non-Public B title — their first state championship in 24 years — in 2018 by defeating Holy Spirit, 48-21, but they lost in last year’s state final to Camden Catholic, 33-29. Alpaugh and the coaching staff have also helped eight wrestlers earn a combined 14 state medals over the last four years, with three of them winning state titles this past season in junior Eddie Ventresca (120), senior JoJo Aragona (138) and senior Robert Garcia (152). Along with the three state champs, junior Kaya Sement (132) and sophomore Shane Percelay (106) placed fifth and seventh in the state, respectively.

Alpaugh is looking forward to the challenge of keeping the Lions as one of the best teams in the state despite graduating Aragona, Garcia, and five other seniors. Last year, the Lions finished ranked ninth in the NJ.com Top 20 rankings and 11th in the New Jersey Wrestling Writers Association Top 20 poll.

“Anytime you have three state champs, two of whom were seniors, it’s going to be tough,” Alpaugh said. “They are like once in a lifetime wrestlers, but we still have Eddie, Kaya, Percelay(Shane) and other quality kids. We do have the benefit of having the Jr Lions program, which is a quality feeder program. We have a culture we built the last few years. We are going to keep working hard to eventually be a top three team in the state and help kids not only get into college, but be impactful wrestlers at that level.”

Alpaugh is a 2008 graduate of Newton High School, where he was a NJSIAA state placewinner in 2008 at 152 pounds, a three-time NJSIAA state qualifier, a Region 1 Tournament champion in 2008, a two-time Region 1 finalist and a two-time District 3 Tournament champion. At the time, Alpaugh graduated as Newton’s all-time leader in wins after going 128-31 from 2004-08, His win total is now good for third best in Braves’ history.

After graduation, Alpaugh wrestled at the NCAA Division I level for Sacred Heart University, where he competed at 157 and 165 pounds until he graduated in 2012. Alpaugh also helped coach at SIR Wrestling club in Lafayette for five years.