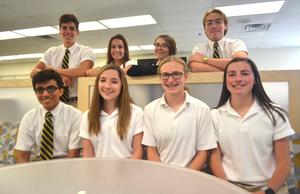 Pope John XXIII Regional High School seniors Ashley Potts and Emily Mundt have been recognized as 2020 National Merit Scholarship Program semifinalists and six other students have been named Commended Students in the program.

Potts and Mundt are two of approximately 16,000 semifinalists competing to become a finalist for the title of Merit Scholar in the 65th year of the program, as announced by the National Merit Scholarship Corporation. Following Potts and Mundt, Douglas Fowler, Hunter Gallo, Bridget McNally, Rohan Mukundhan, Natalie O’Hearn and Olivia O’Hearn are Pope John’s Commended Students for the program.

“It feels really great,” Potts said. “I’ve studied hard for all my classes and tests over the years. It is great to see all of my hard work paying off so that I can represent Pope John in this program.”

“This honor means a lot to me,” Mundt said. “I’m super proud of where I am in my high school career. I’m very thankful for Pope John for providing the tools for me to succeed and help me get to this point.”

Potts and Mundt earned their semifinal spots after competing in a pool of 1.5 million juniors across the country by taking the 2018 Preliminary SAT/National Merit Scholarship Qualifying Test and scoring one of the highest marks in New Jersey. The number of semifinalists in a state “is proportional to the state’s percentage of the national total of graduating seniors,” according to NMSC. The average number of semifinalists for New Jersey is 520 students, which is good for the ninth highest average in the country, according to the Compass Educational Group.

“Administrators in schools across the country are always hoping for that special envelope to arrive in early September to inform them if their schools have a National Merit Scholarship Semifinalist,” Pope John XXIII Regional High School President Monsignor Kieran McHugh said. “We are very blessed to have two wonderful young ladies who are semifinalists this year. We believe it is a great honor and we are so proud of them. We thank them for the wonderful gifts they bring to Pope John that they share with a glad and generous heart.”

To become a finalist, NMSC says Potts, Mundt, and Pope John “must submit a detailed scholarship application, in which they provide information about the semifinalist’s academic record, participation in school and community events, demonstrated leadership abilities, employment, and honors and awards received.”

Potts and Mundt each have impressive resumes to date.

As far as Fowler, Gallo, McNally, Mukundhan, Natalie O’Hearn and Olivia O’Hearn were among approximately 34,000 Commended Students throughout the nation who were recognized for their exceptional academic promise. Although they will not continue in the 2020 competition for National Merit Scholarship awards, Commended Students placed among the top 50,000 scorers in the pool of 1.5 million students who entered the competition by taking the 2018 Preliminary SAT/National Merit Scholarship Qualifying Test (PSAT/NMSQT).

"We are extremely proud of our Commended Students," McHugh said. "They have done wonderful things for our school. They are certainly an ‘Honor to the Father.’"