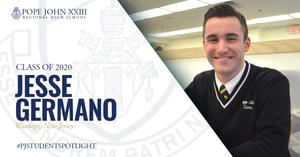 A Wantage resident, Germano is a senior who has shown a great amount of involvement inside and outside of Pope John.

We at Pope John XXIII Regional High School want to share with you our “Pope John Student Spotlight” series in which we recognize our students’ talents and achievements! Today, we want to showcase Jesse Germano!


A Wantage resident, Germano is a senior who has shown a great amount of involvement inside and outside of Pope John. Germano has earned Second Honors in the classroom and is currently taking courses such as AP US Government, Honors English IV, Anatomy/Zoology and Environmental Science. Germano is also an Eagle Scout for the Boy Scouts of America and is the Lodge Chief of the Order of the Arrow-Woapalanne Lodge. In addition, he has earned the Vigil Order, the highest honor that the Order of the Arrow can bestow upon its members for service to lodge, council, and scouting. Germano is also a member of the wrestling and volleyball teams, and has volunteered at One Step Closer Animal Rescue.