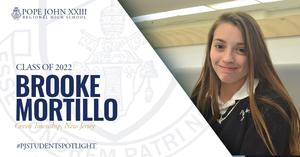 A Green Township resident, Mortillo is a sophomore who has demonstrated a wide variety of talents inside and outside of Pope John.

We at Pope John XXIII Regional High School want to share with you our “Pope John Student Spotlight” series in which we recognize our students’ talents and achievements! Today, we want to showcase Brooke Mortillo!


A Green Township resident, Mortillo is a sophomore who has demonstrated a wide variety of talents inside and outside of Pope John. Mortillo has earned First Honors in the classroom and is currently taking courses such as Algebra II Accelerated, Geometry Accelerated, Chemistry, and French II. Mortillo is also a competitive figure skater, as she has been skating for the last nine years and is a current member of the Skylands Skating Academy at Skylands Ice World. Mortillo and her team will be competing in the Eastern Sectional Championships next week. In addition, Mortillo is a member of the Pope John French club and volunteers at Skylands Ice World, where she helps special needs children learn how to skate and play hockey. Mortillo has a passion for astrophysics, which she wants to major in college, and likes photography.