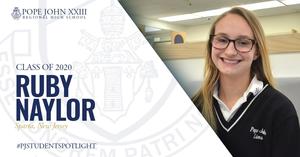 A Sparta resident, Ruby is a senior who has demonstrated a wide variety of talents inside and outside of Pope John.

We at Pope John XXIII Regional High School want to share with you our “Pope John Student Spotlight” series in which we recognize our students’ talents and achievements! Today, we want to showcase Ruby Naylor!


A Sparta resident, Ruby is a senior who has demonstrated a wide variety of talents inside and outside of Pope John. Ruby is an extremely conscientious and hard-working student who has earned Distinguished Honors in the classroom and is currently taking courses such as AP Biology, AP Calculus AB, AP Chemistry, AP English, and Honors Spanish IV. Ruby has shown a great deal of leadership and initiative by starting the school's Red Cross club last year. Ruby is a member of the National Honor Society, Math Honor Society, English Honor Society, World Languages Honor Society, Key Club, and the girls soccer team. Outside of school, Ruby is an EMT, a volunteer at Newton Medical Center, and a waitress at Il Porto. Ruby plans to study pre-med in college and wants to work as a pediatrician.