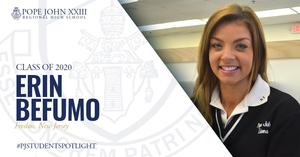 A Fredon resident, Erin is a senior who has demonstrated a wide variety of talents inside and outside of Pope John.

We at Pope John XXIII Regional High School want to share with you our “Pope John Student Spotlight” series in which we recognize our students’ talents and achievements! Today, we want to showcase Erin Befumo!


A Fredon resident, Erin is a senior who has demonstrated a wide variety of talents inside and outside of Pope John. Erin is always smiling and cheerful, whether it's in the hallways, in the classroom or on the field. Erin has earned Second Honors in the classroom and is currently taking courses such as AP Psychology, Anatomy/Physiology, Graphic Design, and Forensic Science. Erin has shown a great deal of leadership as captain of the field hockey team, a member of the Pope John Ambassadors, a member of the Pope John Players, and a member of the Stand Against Bullying club. Erin is also a member of the Thespian Honor Society and a statistician for the Pope John baseball team. Erin is also gifted in graphic design, as she has a refined aesthetic and works very hard. Classmates often ask for her assistance or critique on their projects and she always responds with kindness and intelligence. Outside of school, Erin is a junior volunteer at Newton Medical Center, where she has worked a minimum of 50 hours in assisting staff members with non-clinical functions at the hospital. Erin plans to study nursing in college.