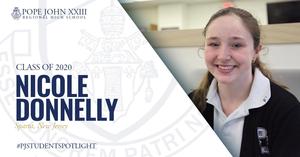 A Sparta resident, Nicole is a senior who has demonstrated a wide variety of talents inside and outside of Pope John.

We at Pope John XXIII Regional High School want to share with you our “Pope John Student Spotlight” series in which we recognize our students’ talents and achievements! Today, we want to showcase Nicole Donnelly!

A Sparta resident, Nicole is a senior who has demonstrated a wide variety of talents inside and outside of Pope John. Nicole has earned Distinguished Honors in the classroom and is currently taking courses such as AP English Language, AP Environmental Science, AP Psychology, AP Spanish, Forensic Science, and Precalculus. Nicole has shown a great deal of leadership for the Pope John girls swimming team, which she has helped win a league championship for the 16th consecutive year and improve its eye-popping winning streak against league opponents to 124 meets in a row. Nicole has also qualified for the New Jersey Meet of Champions and for the YMCA Nationals in the 100 butterfly. Nicole is also a member of the National Honor Society, Spanish Honor Society, Academic Team, and Key Club. Nicole also swims for the Sussex County YMCA and helps coach children in swimming. Nicole will attend Bucknell University, where she plans to major in early elementary education.