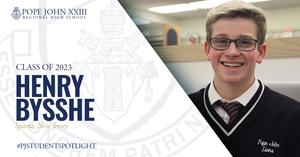 A Sparta resident, Henry is a freshman who has shown a great amount of involvement inside and outside of Pope John.

We at Pope John XXIII Regional High School want to share with you our “Pope John Student Spotlight” series in which we recognize our students’ talents and achievements! Today, we want to showcase Henry Bysshe!

A Sparta resident, Henry is a freshman who has shown a great amount of involvement inside and outside of Pope John. Henry has earned Second Honors in the classroom and is currently taking courses such as Physics, Algebra I Accelerated, World Cultures, French I, and Concert Band. Henry is also a member of the swimming team, baseball team, and the concert band. He also competes in both swimming and baseball outside of school, swimming for the Sussex County YMCA and playing baseball for the Hit & Run Outlaws. Henry also likes to skateboard and plans to volunteer his time this summer at Shred.Co, which is a skateboard instructional program that focuses on trying to “improve mental, physical, and social well being on a local and global scale through skateboarding.”