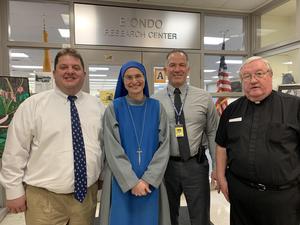 For the last 13 and a half years, the 1996 graduate has served God as a member of the Servants of the Lord and the Virgin Matará (SSVM).


Editor's Note: Throughout the year, Pope John XXIII Regional High School will feature alumni who have excelled in life since graduating and have represented our school with tremendous pride. In this series, called "Lion Pride," we take a look at 1996 graduate Stephanie Rozak, who is now known as Sister Maria Nadiya Beznardiynych.


SPARTA —When she was growing up, Stephanie Rozak kept fighting off the voice inside her.

That voice wasn’t just her conscience telling her to do well at Pope John XXIII Regional High School or avoid any bad behavior.

Rather, it was God asking her to pursue the life of a sister.

After much back and forth through prayer, Rozak decided to give her life to God by becoming Sister Maria Nadiya Beznadiynych after joining the Servants of the Lord and the Virgin Matará (SSVM).

“With any religious vocation, it is something that God asks for,”  said Sister Maria Nadiya Beznadiynych, who has been a sister for the last 13 and a half years. “It is a supernatural calling and you don’t choose it naturally because it is not as naturally attractive as what many people do. … It took a really long time for me to really say, ‘OK!’ It was in praying that I realized the only way I would be happy is if I said, ‘Yes to God!’”

Before becoming a member of the Servants of the Lord and the Virgin Matará, Sr. Maria Nadiya Beznadiynych was a good student from Hamburg who was trying to “get into a good college and try to succeed” outside of Pope John. During her time, she was a member of the Yearbook committee and the school’s Habitat for Humanity chapter.

While walking the hallways and attending Pope John, Sr. Maria was confirmed in her Catholic beliefs.

“One thing that Pope John helped with was to be in an environment where it was normal to be Catholic,” she said. “I was always surrounded by people who believed in God and it made me realize it was normal.”

After graduation, Sr. Maria went on to graduate from LaSalle University and become a teacher. During her time as a teacher, she stayed next to a local parish and that was when God started to change her mind.

“I began at a certain point to start understanding him through the Eucharist,” she said. “I would go to Mass every day and adoration at all weird hours. It was there in adoration that I realized that God is a person. He is the one who loves me, who is calling you, and gives you the strength to answer the call.

“He also made me realize that there is something other than this life. It is so human that our days are filled with ordinary things and we forget that we are called to do extraordinary things.”

After this realization, Sr. Maria took some time to travel and find a religious order that she associated with the most. That is when she found the Servants of the Lord and the Virgin Matará, an order that is housed in Rome and is located in 40 countries around the world.

Sr. Maria met a sister from the Servants of the Lord and the Virgin Matará after riding a Greyhound bus back from Canada where she was visiting another religious order. She said joining a religious order is similar to when someone finds the person whom they want to marry.

“It is a similar experience in that you feel you want to marry them and nobody else,” she said. “It is the same when God calls you to a charism. It was in my experience in visiting the SSVM that I started to learn what religious life was and was attracted to the charism that you can always learn more about God.”

Since then, Sr. Maria has spent almost a decade and a half being faithful to God. While she understands that to some people religious life may not be a glamorous life to live and it is easy to just ignore the call, Sr. Maria has some piece of advice to offer them and those who may be considering this life.

“Saint John Paul II said the following words from the Gospel at the beginning of  his pontificate, ‘Be not afraid!’…to give your life to God!” she said. “In this time and this world that we live in, be heroes of love because that is what we are all called to be.”