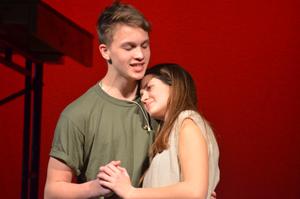 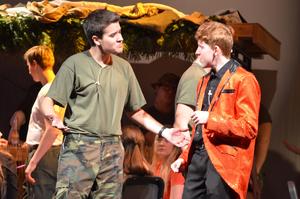 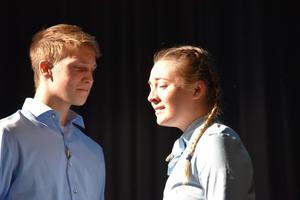 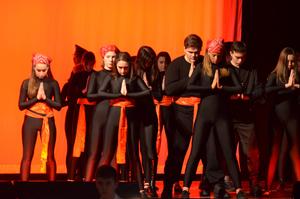 This weekend, the Pope John Players will present the Tony Award-winning play that dives deep into political and social issues during the Vietnam War at Pope John XXIII Regional High School.

“It’s a big honor to do this show,” Pope John senior Hunter Gallo said. “Over the years, this program has had a history of performing shows that no other school wants to even touch, whether they are too difficult, too complex, or what have you. This is another one of these challenging shows that we take a lot of pride in doing and have to step up in order to make it really successful.”

“To me as a history teacher I always want to offer a history lesson and moral thought questions in the show,” Pope John Players director Jacquelyn Burt said.

“‘Miss Saigon’ tackles so many tough issues for our times — immigration, how we treat our military and veterans and discrimination and women’s rights.”

Based on the Puccini opera “Madame Butterfly” and produced by the “Les Miserables” team of Alain Boublil and Claude-Michel Schonberg, “Miss Saigon” follows the lives and love stories of a Vietnamese orphan, two American GI's, an American girl and the sleazy club owner who manipulates them during the Vietnam War as Saigon falls. “Miss Saigon” has garnered 31 theatrical awards, been performed in 25 countries and viewed by over 35 million people worldwide.

Though the show has many hot-button issues it addresses, the Pope John Players are making sure that they are covering these issues with respect to those who had to endure them over 40 years ago and are still dealing with some of them today.

“With Mrs. Burt’s history, law and teaching background, we have tried to make sure this is an inclusive show,” said Pope John senior and student director Haley Oroho. “We want to make sure everyone has their say and are depicted the right way.”

“We are paying homage to the trials and tribulations immigrants and members of our armed forces from that time period have faced,” said Gallo, who is a student producer for the show and is playing the role of Thuy, a Vietcong general. “We’ve taken every precaution in making sure these issues are done with the utmost respect.”

The Pope John Players received some guidance from not only Mrs. Burt, but also from Vietnam veterans, Sparta Mayor Jerry Murphy, Pete Litchfield and Doug Nobile, who spoke to the group to prep each member for their roles. Murphy, Litchfield, and Nobile are receiving Pope John’s Outstanding Contribution for Youth in Theatre Award for their efforts.

“That was a powerful experience” Karolchyk, who is also student director for the show, said of meeting with the Vietnam veterans. “We’re trying to be careful with everything that we do and say, but we want to bring all of these issues to light as best we can. They shared their experiences with us and it is going to make us better for the show.”

While the political and social issues are big themes throughout the show, “Miss Saigon” is also another show loaded with complex sets. The biggest set pieces are a helicopter that was made by science teacher Frank Setlock and Vietnam pilot Mark Daniels to actual specifications, and a 1962 Cadillac that was soldered, stripped and repainted under the loving supervision of Setlock and James Holowienka.

“As soon as we announced that we were doing this show, people were wondering if we were going to have a helicopter or a car,” Gallo said. “The answers we gave were ‘Yes we will!’ The Pope John administration, Mr. Setlock, Mr. Daniels, and many others have worked hours and hours on these sets. We cannot thank them enough for their support. These sets are a tall order, but they are going to make this show that much more special and the audience is going to really appreciate them.”

When it will be time to roll back the curtain and perform, the Pope John Players will not only try to help the audience learn the powerful lessons from this play, but also show that it can handle a play of this magnitude.

“I think we are going to have an amazing show,” Oroho said. “After eight weeks of practice, we are ready to put our all into this. It’s going to be one of the best shows we ever had.”