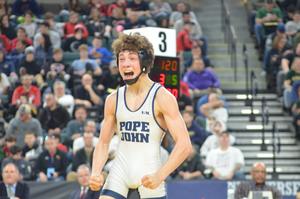 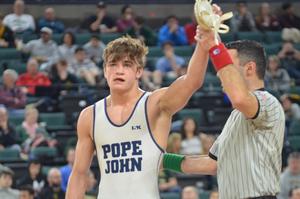 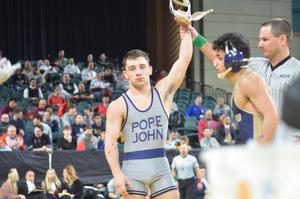 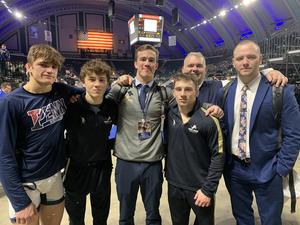 
ATLANTIC CITY —The Pope John XXIII Regional High School wrestling team made the final day of the 87th NJSIAA Wrestling Championships worth it.

Senior Kaya Sement, senior Eddie Ventresca, and junior Shane Percelay each placed in the top five of their respective weight classes by winning their final matches on Saturday at Boardwalk Hall.

Percelay and Sement each placed third in the three-day tournament, with Percelay earning a bronze medal at 120 pounds while Sement grabbed one at 145. As for Ventresca, he placed fifth at 126.

These three Lions fought hard all tournament long to earn their state medals and give the program 41 state placewinners in its history.

Ventresca, who placed sixth in 2017, third in 2018, and won a state title at 120 in 2019, made it as far as the semifinals, but his bid for a second straight state championship ended with 5-4 double-overtime loss to McKenzie Bell of Kingsway. Though he lost his next match to Alex Ameyda of St. Joseph-Montvale, 5-2, in the consolation semifinals, Ventresca came back and dominated Messina to earn his historic medal.

“Obviously, it was not the goal I wanted to achieve, but I came back and ended my career with a win,” Ventresca said. “I came down here every year wanting to win the whole thing. I was able to win it all once. No one can ever take that away from me. I will always be a state champ. Today, I knew it was my last high school match and I just let it fly.  I am a four-time placewinner, which is nice.”

Ventresca, who will continue his academic and wrestling careers at Virginia Tech next year, was not only happy with all of his individual accomplishments, but representing Pope John and helping it turn around its wrestling program to become one of the best programs in the state. During Ventresca’s career, the Lions won a Non-Public B championship in 2018, three Non-Public, North B titles from 2018-20, and three District 2 Tournament titles from 2018-20.

“It’s been a blessing,” Ventresca said. “I know the last couple graduating classes, our class, and the younger grades were a big part in turning it around. We made something special and we hope it continues.”

Percelay and Sement became the 10th and 11th Pope John wrestlers to place two or more times in the state tournament.

Percelay, who placed seventh at 106 last year, won six matches in a row in the consolation bracket to earn his bronze medal. Percelay defeated Ethan Fernandez of Westwood, 5-4, in the third-place bout.

For Percelay, this medal meant a lot to him because he bounced back from a 6-5 ultimate tiebreaker loss to Paulsboro’s Georgio Mazzeo in the pre-quarterfinals to earn his career-best finish.

“It feels pretty good to take third in one of the hardest brackets in the tournament,” Percelay said. “I was upset after my match, but (Pope John assistant coach Ryan) Harrington told me to come back and take third. I had to do the same thing at the Beast of the East Tournament and Escape the Rock Tournament this year where I wrestled five or more matches in a day. I just really wanted to place as high as possible.”

Percelay ended the season with a 41-6 record and pushed his career record to 95-21. His junior campaign also included his third District 2 title and first Region 1 title.

As for Sement, who placed fifth in the state at 132 last year, he won four matches in a row in the consolation bracket to pick up his bronze medal. Sement secured his finish by beating Michael Dellagatta of St. Joseph-Montvale, 4-1, in the consolation bout.

Sement was happy to end his career on a high note, especially after dropping a 4-1 decision to Delbarton’s Andrew Troczynski in the quarterfinals.

“It feels great,” Sement said. “After the loss yesterday, it hurt, but my goal was to keep on winning and I knew I had to run the gauntlet to get to third. I did that, and today I wanted to win my last high school match. I’m just happy I accomplished it.”

With his win, Sement capped a three-year career at Pope John that included three District 2 titles, two Region 1 championships, and two HWS Tournament titles. Sement finished the year with a 37-5 mark and a 108-21 career record, with his win total being good for the sixth-most wins in school history.

Sement, who will continue his academic and wrestling careers at the University of Pennsylvania, also enjoyed his time as a Pope John wrestler.

“I loved every bit of it,” Sement said. “I don’t regret a thing. It feels great that we were able to leave behind some great accomplishments. I looked up to a lot of my teammates over the years and I hope they look up to me as well. It was an amazing three years.”

Along with the Lions’ three state placewinners, senior Matt Garcia (152), sophomore Jack Stoll (182), sophomore Peter Delaportas (195), and senior Cole Zydel (220) competed in the tournament, but did not place.

Garcia and Stoll came the closest to placing. Garcia won his preliminary and pre-quarterfinal matches on Thursday, but lost in the quarterfinals and in the fourth round of wrestlebacks on Saturday. Garcia finished his Pope John career with a 93-42 record, including a 27-10 campaign this year, while also winning a District 2 title, placing second at Region 1 this year and finishing fourth at 145 in 2019, and making the state tournament twice in his career after getting to Boardwalk Hall as a junior.

Stoll went 3-2 in the tournament, winning his preliminary round bout, losing his pre-quarterfinal round match, and winning his bouts in the second and third rounds of wrestlebacks before losing his second match in the blood round. Stoll finished the year with a 25-20 record that included third-place finishes at District 2 and Region 1. Stoll comes into 2020-21 with a career record of 29-27.

Zydel finished with a 47-41 career record that included a District 2 championship and a third-place finish at Region 1.

Delaportas lost both of his matches in the preliminary round and the first round of wrestlebacks, but still ended with a 24-16 record this season. Delaportas also became only the 16th Pope John sophomore to ever qualify for states after placing second in District 2 and fourth at Region 1.