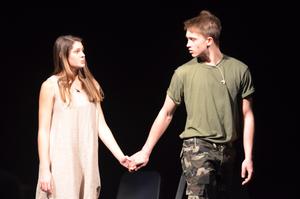 Even in the midst of worldwide pandemic, the 2019-20 Pope John Players will get to perform one last show this year.

Tonight, the Pope John Players will present excerpts of  “Miss Saigon”, the Tony Award-winning play that dives deep into political and social issues during the Vietnam War, in a special live performance at the Bucks County Playhouse’s Virtual Student Theater Festival. The performance will take place around 8:30-9 p.m. on the Bucks County Playhouse’s private Facebook group via Facebook Live and ZOOM.

This is the second straight year the Pope John Players are performing at the Student Theater Festival. Last year, the theatre group showed both “Newsies: The Musical” and “The Phantom of the Opera” in the event at Bucks County Playhouse, which is located in New Hope, Pa. and known as America’s most famous playhouse. The group also performed at the festival’s “Best of the Fest,” a one-night showcase performance featuring the best schools at the festival.

The Pope John Players are overjoyed that they have a chance to end this year with one final performance, considering the coronavirus has forced the closure of school buildings, entertainment venues, and businesses all around the world over the last two months.

“It is such an honor and privilege to perform for such a great program one last time,” Pope John senior Brendan Karolchyk said. “Although it is online, it is still a great opportunity to do something that we all love doing.”

“I’m ecstatic that we get to perform at the theater festival at Bucks County,” Pope John senior Hunter Gallo said. “The experience last year when we were able to go twice was something I will never forget, and it’s a fantastic honor to be invited back to its virtual performance.”

“This is normally the time of year when the PJ Players are performing and competing outside of the school campus, which brings us even closer together as a group,” Pope John Players director Jacquelyn Burt said. “It is a time of year when I reflect on my seniors and how much I will miss them. Though this year has been anything but normal, I find that I am filled with the same thoughts of pride and honor to have worked with this amazing group of students known as the 2019-2020 Pope John Players, which once again tackled ‘the tough stuff’ and came through with flying colors.”

The Pope John Players, who performed “Miss Saigon” as part of their spring production back in late February, will be performing in the last of three shows tonight at the virtual festival. The performance will take place via a ZOOM meeting, which will serve as the festival’s virtual stage, then will be streamed on the Bucks County Playhouse’s Virtual Student Theater Festival private Facebook group. The group is closed to the public, according to the Bucks County Playhouse.

The Pope John Players earned this chance after performing well during a dress rehearsal last Friday.

‘We did not expect to have any opportunity to come together again,” Burt said. “Though we are separated by distance, the same spirit of community purpose and pride is there. Though only a limited number of performers will go live, we were able to include show clips that show everyone of our players. I am profoundly grateful to Michaela Murphy, Joann Bull, Alex Fraser and Ellen Gallos at the Bucks County Student Theatre Festival for finding a creative and meaningful way for our students to perform together again. They truly understand the meaning of ‘The show must go on!’”

“I think this is just what the community needed in such troubling times,” Pope John junior Declan McHale said. “The arts really help bring everyone together, but with Broadway and schools being shut down, it’s been difficult to be united. The Student Theatre Festival will help take people’s minds off the fact they are stuck at home, and remind us that we are together, even though we’re far apart.”

The Pope John Players will get to show their rendition of “Miss Saigon,” which follows the lives and love stories of a Vietnamese orphan, two American GI's, an American girl and the sleazy club owner who manipulates them during the Vietnam War as Saigon falls. Based on the Puccini opera “Madame Butterfly” and produced by the “Les Miserables” team of Alain Boublil and Claude-Michel Schonberg, “Miss Saigon” has garnered 31 theatrical awards, been performed in 25 countries and viewed by over 35 million people worldwide.

The Pope John Players will not only get to show their  talents virtually to those attending the performance, but they will also get to have their performance hosted and judged by Walter Bobbie, a renowned director/actor and winner of the Drama Desk Award for Outstanding Director of Broadway's "Chicago".

Though they will not be performing in front of an actual audience, the Pope John Players are looking to break a leg one last time given all that they have been through the last couple of months.

“This year has been crazy,” Karolchyk said. “It’s been upsetting having our senior years interrupted and having the performances we look forward to having being cancelled. I have been in this great program for five years and I have enjoyed every minute of it. This is my last performance with this group and I can promise you that it will count. We are so excited to try this new experience!”

“I really want this to be the Pope John Players’ best performance,” Pope John senior Haley Oroho said. “It is the last time that all the seniors will get to be part of the program before we go to college.”