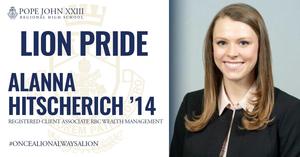 A 2014 graduate, Alanna is one of many alumni who have represented our school with tremendous pride since graduating.

We want to continue our Lion Pride series in which we recognize alumni who have represented our school with tremendous pride since graduating! Today, we recognize Alanna Hitscherich!

A 2014 graduate, Pamela went on to graduate from the College of Holy Cross with a Bachelor’s degree in Economics. She also was a member of the school’s NCAA Division I track and field team. Alanna broke the school record in the long jump, competed in the hurdles, and served as team captain as a senior. Alanna also worked internships in finance, including one at Morgan Stanley in Massachusetts. After graduation, Alanna went on to work for J.P. Morgan in New York City, serving as a client associate. Alanna also earned her series 7 and 63 finance accreditation after only working a short time. Alanna currently works as a registered client associate for RBC Wealth Management, which boasts one of the all-time most successful all-female finance groups in the country. Alanna resides in New York City.

Congratulations Alanna on all of your accomplishments so far and keep showing you Pope John pride in everything you do!

PJ Alumni: If you want to be featured, please send an email with photo to anthonyspaulding@popejohn.org