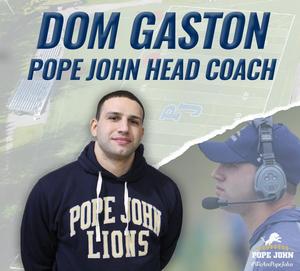 After coaching on college level, Gaston returns to lead Lions.

SPARTA — Bringing quality coaching experience from both the high school and collegiate levels, Dominique Gaston has been named the next head coach of the Pope John XXIII Regional High School football program, it was announced Friday.

Gaston is only the third head coach in the last 54 seasons for Pope John. Gaston previously served as an assistant coach for the Lions for four seasons before becoming an assistant coach at the NCAA Division I and III levels, where he had coached for the last two seasons.

“The Pope John community and I are excited to have Dom back in the coaching ranks,” Pope John XXIII High School president Rev. Msgr. Kieran McHugh said. “Dom has coached at Pope John before and has proven he is a quality coach. More importantly, he is a quality person. He is well liked by kids, parents and people in the community. We are very happy to have him back and leading us. I know he will gather a sterling staff and he has the full support of our administration.”

“I’m so excited to be coming back home,” Gaston said. “Pope John was the start of my coaching journey, and it really gave me a sense of family and community from the beginning. Being a head coach has always been a goal of mine, especially at a school like Pope John where there is a rich tradition of success academically and athletically. I want to thank Father McHugh, Mia Gavan, Gene Emering, the administration, and the entire search committee for entrusting me to lead the football program.

“I have big dreams and even bigger plans for this program, starting with working our way back to the top of the mountain,” Gaston continued. “One of the first steps I plan on taking is instilling the Gold Standard for my players and staff. We all need to trust the process, commit to the process and invest in the process. We are not just a family, but we are a Pride. We are Pope John!”

Gaston will look to put his stamp on a Lions program that has won 20 state championships and posted a 432-157-5 record in 59 seasons on the gridiron.

Gaston first coached as an assistant with the Lions during the 2012-13 season. Then after spending two years away from the team, Gaston returned to help coach the Lions as the team’s defensive coordinator and linebackers coach for the next three seasons.

During his final three seasons, Gaston helped the Lions advance to the Non-Public, Group 3 semifinals two times and reach as high as No. 4 in the News12 Varsity Tri-State Top 20 poll, No. 6 in the NJ.com Top 20 poll, No. 7 in the USA Today High School Sports Super 25 East Regional rankings and No. 98 in the High School Football America Top 100.

Before earning the head coaching position at Pope John, Gaston broke into the college coaching ranks in 2018 by becoming the wide receivers coach at Bates College, a NCAA D-III program in Lewiston, Maine that is part of the New England Small College Athletic Conference. While at Bates, Gaston constructed a coaching strategy based on strengths, weaknesses and skills of individual players, monitored athletes academic and behavioral requirements, and collaborated in recruiting and procurement of top-level student-athletes.

After one season with the Bobcats, Gaston made the jump to the D-I level in February 2019 by joining Bryant University — a member of the Northeast Conference — as its running backs coach. Gaston helped the Bulldogs by contributing to the creation of offensive installs that helped in the buildup of their playbook and guiding spring positional meetings and individual drills that helped strengthen the running back position.

Four months later, Gaston took a position at Long Island University, another D-I program in the Northeast Conference, as its wide receivers coach and recruiting coordinator. While with the Sharks, Gaston developed and executed a coaching strategy and techniques based on strengths and weaknesses of every wide receiver, delegated weekly breakdown against opposing defensive coverages, and managed recruiting protocols, recruiting areas, data upload, travel and NCAA compliance for the program.

A native of Union City, Gaston is a 2008 Bergen Catholic graduate. Gaston, a linebacker who played under former head coach Fred Stengel, was named to the All-Bergen County First Team in 2007.

After graduation, Gaston went on to graduate from Wagner College, where he also played football and got his first taste of Northeast Conference competition. Gaston ended up starting for two years as a linebacker and playing 42 career games before graduating in 2012 with a Bachelor’s degree in Sociology.

In addition to his coaching and football careers, Gaston has previously worked as a supplemental math teacher for the Sussex County Commission, helping schools such as Pope John High School, Pope John XXIII Middle School, and Veritas Christian Academy. Gaston has also worked at Reverend George A. Brown Memorial School as a math teacher.