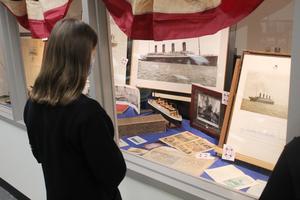 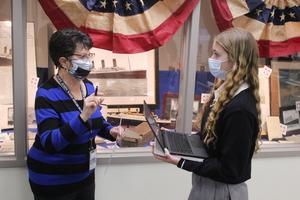 
SPARTA — Since its sinking over 100 years ago, the Titanic has had its story told a million different ways.

Over the last few weeks, Pope John High School, Pope John Middle School, and Reverend George A. Brown Memorial School students have gotten the chance to take a deep dive into arguably the most famous passenger ship in world history through the Vincent M. Love Titanic Exhibition at the Biondo Research Center.

The exhibition is museum quality features a collection of items from the Titanic, a British passenger liner that sank in the North Atlantic Ocean on April 15, 1912 after striking an iceberg during its voyage from Southampton to New York City.

The collection for the exhibition is on loan courtesy of the estate of Vincent M. Love, who was a U.S. Army veteran who had a deep interest in transportation, the shipping industry, and all things maritime before he passed away in 2020. Love’s interest in historic ships led him to collecting memorabilia of shipping disasters and becoming an expert on the Titanic’s disaster. Love also served as an expert consultant on the first Titanic movies.

When it came to learning about this collection, Pope John High School students taking social studies classes this year took a tour of the exhibit and not only learned about the Titanic’s story, but also Vincent Love’s passion for collecting these items and the stories behind these artifacts.

In addition, select Pope John High School students earned the opportunity to participate in a honors symposium called “Titanic: A Return to the Depths.” Under the direction of Pope John social studies teacher Jacquelyn Burt, who is also a member of the Titanic Historical Society, 25 students got to explore the primary sources and Woods Hole Oceanographic Institute findings of the Titanic while also reporting on Boards of Inquiry theories and passenger survival stories.

“I thought it was really interesting,” said Pope John junior Lily Marino, who attended the honors symposium. “I’m kind of a nerd when it comes to history and artifacts. It was really cool to be able to see all of these things and how they are connected to all of these people. I loved learning and researching the in-depth stories about this.”

As for Pope John Middle School and Reverend Brown’s fourth grade students, they had an opportunity to put these artifacts in context with a readers theater called, “The Voices of the Titanic,” from the Pigeon Forge and Branson Titanic Museums. Pope John High School’s Biondo Research Center media specialist Judith Zoeller curated the exhibition and facilitated the elementary and middle school workshops.

Pope John Middle school sixth grade student Aiden Tighe was amazed at how much he learned about the Titanic during his visit.

“It was very interesting,” Tighe said. “I learned more in 80 minutes than I did with my one year of research.”

“It was really cool to see and learn,” Csoka said. “I knew that it was a story about a boat hitting an iceberg and it sinking, but now I know more details about the people on the ship, what they had to do to get off it, and what happened after it sank. It was also great to see the artifacts up close because there are not a lot of places that can get their hands on these items.”

The exhibition will be displayed through early April. Fortunately for the Academy, the exhibition has already enabled students to view the story from a different perspective.