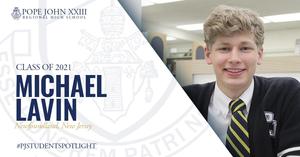 A Newfoundland resident, Michael is a senior who has demonstrated great talents inside and outside of Pope John.

We at Pope John XXIII Regional High School want to share with you our “Pope John Student Spotlight” series in which we recognize our students’ talents and achievements! Today, we want to showcase Michael Lavin!

A Newfoundland resident, Michael is a senior who has demonstrated great talents inside and outside of Pope John. Michael is a nice, respectful, and hard-working student who has earned Distinguished Honors in the classroom and is currently taking courses such as AP Calculus BC, AP English Language, AP Psychology, AP Spanish, Honors Discrete Math, and Forensic Science. Michael is also a member of the National Honor Society, Math Honor Society, English Honor Society, Honors Jazz Ensemble, and Pope John Players. Michael also served as the captain of the boys soccer team, boys swimming team, and boys volleyball team and as a senior class representative for Student Council. Outside of school, Michael volunteers at Our Lady of the Lake Church, works at Dairy Queen, and loves the outdoors. Next fall, Michael will attend Villanova University, where he plans on majoring in mathematics and political science in hopes to pursue a career in politics.
Published April 16, 2021 Print