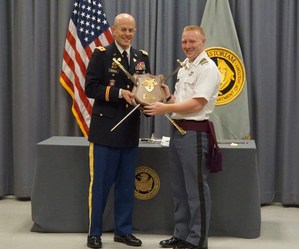 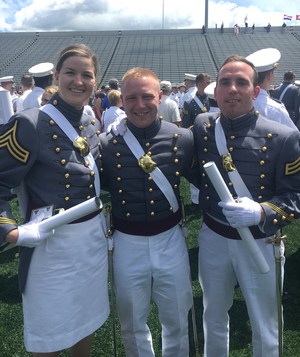 Back in May, 2013 Pope John XXIII Regional High School graduate Christian Sloan forever etched his name into the U.S. Military Academy's tradition when he graduated from the school and was commissioned as a second lieutenant.

According to its website, the United State Military Academy’s mission is “to educate, train and inspire the Corps of Cadets so that each graduate is a commissioned leader of character committed to the values of Duty, Honor, Country and prepared for a career of professional excellence and service to the nation as an officer in the United States Army.”

This is something the academy based in West Point, N.Y. has been doing for the last 215 years, making it a tradition that is unlike any other collegiate institution.

Back in May, Christian Sloan forever etched his name into that tradition when he graduated from the school and was commissioned as a second lieutenant.

Though he was part of a class of 936 cadets, the 2013 graduate of Pope John XXIII Regional High School still found a way to make an impact on the academy, as he received the General of the Army Omar N. Bradley Award for excellence in historical research and writing for his senior thesis on Jamaican pirates.

“It’s an honor,” Sloan said of receiving the Omar Bradley Award, along with finishing ranked 17th in his class academically. “I didn’t really expect it. My goal when I came here was to graduate as a commissioned officer. It was a great experience to go through the three pillars: the academics, the physical and the military. It was tough, but ending it like this was amazing.”

Sloan came into the Army looking to continue growing as a leader and a person after a successful career at Pope John, where he had a GPA over 4.0 and received a nomination from Rep. Scott Garrett for his application to the academy. He also played on the football team and competed as a sprinter on the outdoor track and field team, with his track career ending as an All-Herald first team selection as a member of the Lions’ 4x100-meter relay team.

Sloan was able to handle the rigorous cadet basic training, the intense schooling, and the non-stop military commitments. When he entered his final two semesters last year, Sloan had to take a “graduate school-like” course in which he had to pick an instructor to be his “mentor” on a research topic he wanted to study.

Sloan, who was concentrating his studies in U.S. history, said he learned about Colonial America in the first semester.

Then in the second semester, Sloan wanted to specifically learn about the Jamaican pirates’ conflict with the “planters” during the late 1600s — a topic he thought he “would get a cool trip out of it” at first because he said West Point’s history department sometimes sends cadets to places all over the world to conduct their research.

“That was originally why I picked Jamaica,” Sloan chuckled. “They’ve sent people to the Vatican, Australia and other places. So, I almost went, but things didn’t work out.”

“Most people said it was for economic reasons. But through my research, I ended up discovering that there were more social and political reasons why they were fighting,” Sloan said. “Each group didn’t like the way the other one acted, so they tried to do whatever they could to kick each other off the island.”

Sloan said the pirates, who were set up as a democracy, ended up losing the conflict to the planters, who ran “like a British aristocracy.” The pirates were forced to move out to the Bahamas and other islands.

After finding out all of this information plus other important facts, Sloan wrote a 55-page draft for his mentor. Then, Sloan had to cut down the paper to 30 pages in order to be eligible for the Omar Bradley Award.

Once it was finished, Sloan had to present his thesis to fellow cadets, instructors and members of the academy. Sloan felt good about his presentation because it was a subject that had hardly been explored.

“I knew it was going to be a fun topic,” Sloan said. “Usually, people write about a famous battle. You can imagine that at West Point, finding a battle to write about is popular. But, everyone’s paper is supposed to be a unique big contribution to the field. A lot of people wrote about pirates, but not many had wrote about what I was writing about.”

When he made his presentation wearing an eye-patch and sporting a peg leg, Sloan was excited to see all the great reaction that everyone had to his thesis.

“People seemed really into it,” Sloan said. “There were people who studied all sorts of majors there all because they were interested in pirates. It was amazing.”

All of this attention he got was a big reason why he received his award, which features two crossed sabers and a plaque. Sloan felt he couldn’t have done this thesis without a ton of help from his mentor, West Point and everyone else involved in the process.

He also felt the award and experience that came with the thesis will help him make future contributions to the Army in the future.

“The experience going through that thesis helped me learn how to write and communicate both clearly and effectively,” said Sloan, who is currently based in Fort Benning, Ga. “Those are some of the most important skills an officer can have. Whether you are in contact with the enemy or are trying to report back to your commanding officer, you have to be able to give people a picture of what is going on out there in the battlefield.”