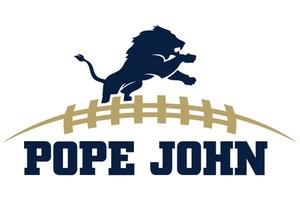 “Making the decision was not difficult, as the safety of our students is primary,” Pope John President and Principal Father McHugh said. “After all, it is only a football game. A game can be played anytime. We thank our families and fans for their patience and understanding. Our prayers are with the people of Florida at this time. Hopefully, we will be able to visit the people of Lake Gibson in the future.”

“Due to Hurricane Irma and the state of emergency in Florida right now, we had to cancel our game against Lake Gibson,” Pope John XXIII Regional High School Athletic Director Mrs. Gavan said. “We hope that everyone at Lake Gibson and in Florida stays safe in the coming days.”

But, Hurricane Irma is a Category 5 storm, with sustained winds of 185 mph. The current forecast track shows the hurricane could turn toward Florida over the weekend.

“We were looking forward to it,” Pope John head coach Brian Carlson said. “It was going to be the first time that Pope John was going to take a plane and play out of state. They are No. 17 in the state (of Florida) and we thought it would be great competition, but obviously with the hurricane coming, they canceled all the games down there.

“We wish all the people down there good luck.”

Now that the game against Lake Gibson has been canceled, Pope John has not scheduled a game in place of Lake Gibson at this time. Until further announcement, the Lions’ next game will be against Malvern Prep, of Malvern, Pa., on Saturday, Sept. 16 at 1 p.m. at Pope John XXIII Regional High School.

Also, the Alumni Reception that was scheduled for Saturday from 7-9 p.m. at Smokey Bones Bar & Fire Grill in Lakeland, Fla., has been canceled.