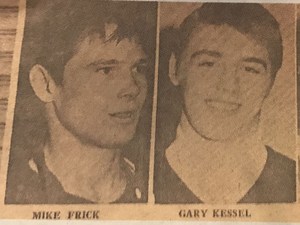 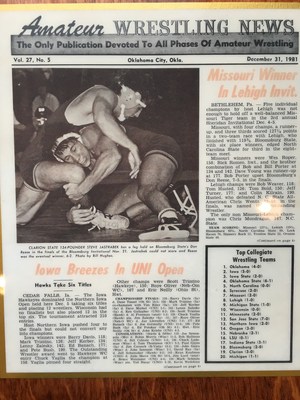 Tonight, both of these former standout Lions will make history for the school again, as they will be the first pair of Sussex County wrestlers from one school to be enshrined in the National Wrestling Hall of Fame’s New Jersey chapter.

When people think about the best wrestlers in the history of Pope John XXIII Regional High School’s wrestling program, Mike Frick and Steven Jastrabek are two of the names at the top of the list.

Tonight, both of these former standout Lions will make history for the school again, as they will be the first pair of Sussex County wrestlers from one school to be enshrined in the National Wrestling Hall of Fame’s New Jersey chapter. Frick and Jastrabek will be honored at the organization’s 17th annual induction ceremony at the Westin Hotel in Princeton.

“It’s a great honor to be inducted,” Frick said Sunday in a telephone interview. “Pope John was a great place to begin my wrestling career. I had a lot of great coaches and great support.”

Frick, Class of 1972, will receive a Lifetime Service to Wrestling Award. The award is given in recognition of years of dedication to the development of leadership and citizenship in the youth through the sport of wrestling.

Jastrabek, Class of 1978, will receive the Outstanding American Award. The award is given to former wrestlers who are highly successful and use the disciplines learned in wrestling in their profession.

Frick and Jastrabek, along with former Hopatcong wrestler and wrestling official Gary Kessell, will be the first wrestlers from Sussex County to be inducted into the Hall of Fame. Frick and Jastrabek helped put Pope John on the map in wrestling.

Frick, a Hamburg native, ended his high school career with a 97-1 record, with his only loss coming to Pennsville’s John Laxton in the 106-pound state final as a sophomore.

Frick later went on to capture two NCAA Division I Championships while wrestling at Lehigh University. He won both of his titles in back-to-back fashion from 1975-76 and was named the Outstanding Wrestler in 1975.

He finished 86-9-4 at Lehigh, and holds a NCAA record for defeating five NCAA champions at five different weights up to 150 pounds. After graduating in 1976 with a degree in American Studies/History, Frick went on to wrestle internationally for U.S. AAU team and coach at both the U.S. Naval Academy and the University of Arizona. He also tried to make the U.S. Olympic team in 1980, but fell short in his bid for it.

Following his competition on the mat, Frick coached at a variety of high school, middle school, and club level programs both in New Jersey and Pennsylvania. Throughout it all, though, he felt he always carried the lessons he learned at Pope John

“It was a big part of my success,” Frick said. “It helped me develop the work ethic I had. It was never a chore. I did it because I loved being a part of the sport.”

Two years after Frick graduated, Jastrabek entered Pope John for the 1974-75 school year. At that time, Jastrabek wanted to be just like Frick on the mat.

“For me, I was in total awe of Frick,” Jastrabek said. “He wrestled in the early 70s and I came in the late 70s. So as a freshman wrestler, you look at the trophy case and there is Mike Frick, who was probably the greatest New Jersey wrestler who ever lived and is one of the best that this country ever produced.”

Jastrabek did stand out, but in his own way.

After performing well on the recreation level for his hometown of Branchville and wrestling at the junior varsity level as a freshman, Jastrabek became a three-time district champion, a Region 1 champion, a two-time state tournament qualifier and a third-place finisher in the state at 129 pounds as a senior.

After graduating from Pope John, he wrestled at powerhouse Blair Academy as a post-graduate and won the national prep title at 130 pounds in 1979. From there, he went on to Clarion State University, where he posted a 32-7 record for a program that finished in the top 15 in NCAA Division III three times in his career.

And like Frick, Jastrabek made an effort to make the U.S. Olympic team after college, but he tried to do it for the 1988 games in Seoul, South Korea.

He began his journey by wrestling on the AAU circuit. He went on to win the AAU title in Indianapolis in the 130-pound class, and advanced to the World Amateur Championships in Tempe, Ariz. Making the finals at the WAC would have guaranteed him a slot at the U.S. Olympic Trials, but he ultimately lost in the quarterfinals, bringing an end to his career on the mat.

Since his days wrestling on the mat, Jastrabek has kept up his love for the sport of wrestling.

Jastrabek currently serves as the president of the New Jersey Chapter of the National Wrestling Hall of Fame. He is also on the Board of Governors at the National Wrestling Hall of Fame Museum in Stillwater, Okla. Jastrabek is also the executive director of the Night of Legends Foundation, a nonprofit organization that raises funds for amateur wrestling, and a world-renowned hair stylist based in Bernardsville.

Before that, he was instrumental in fundraising for the 2000 U.S. Olympic wrestling team. He also founded the New Jersey Night of Champions program, which has raised more than $1 million for amateur wrestling.

Jastrabek felt all of these accolades and efforts on and off the mat would not have been possible without having Pope John provide him the foundation to grow as a person and an athlete.

“It was paramount,” Jastrabek said of his Pope John experience. “The most formidable years for me were here. Pope John was my longest tenure of any place I stayed and it was instrumental in developing these skills.”

And now, they will add more accolades and respect to the wrestling program, which has been on the rise for the last two years.

“It should have an impact,” Jastrabek said. “The wrestling team has done well recently and hopefully we can inspire those kids that are there now.”