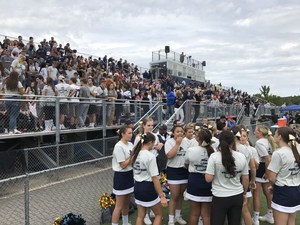 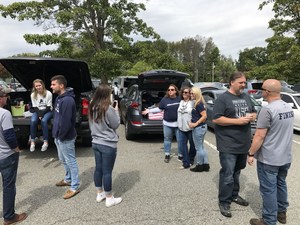 The cars came rolling in one-by-one, the sandwiches kept being served, the people were filling the bleachers left and right, and the roar of the Pope John fans got louder and louder as the game went on.

SPARTA — The cars came rolling in one-by-one, the sandwiches kept being served, the people were filling the bleachers left and right, and the roar of the fans got louder and louder as the game went on.

“Everybody looks forward to the first week of the school year and the first games of the season, no matter what the sport is,” Pope John XXIII Regional High School President and Principal Father McHugh said. “Somehow and someway, this always brings people together for that one common denominator: to become part of this excitement.”

For most people, attending a Pope John football home game has been a long-standing tradition.

Chris McGrath has been coming to them since he graduated in 1977 from the school. McGrath, who was inducted into the Sussex County Sports Hall of Fame in 2011 after a stellar football career with the Lions, loves the gameday rituals here.

“It really is a full day,” McGrath said. “You have mass, you go to breakfast together, see everyone. I enjoy it all.”

Nicole Cluett has also made her way back here when she could since graduating from here in 1993. Cluett said that every time she comes with her family, it is like she is going back in time.

“The atmosphere is one of energy and positivity,” Cluett said. “It is just as exciting now as it was back then. There’s something about these games that just gets you into it.”

Peter Corcoran, a senior, has been coming to the games for the past four years and he loves how this brings everyone together.

“It’s not just football here, it’s a community,” Corcoran said. “We all love each other. We are one big family. This school treats every one of us great and we love it here.”

However, there were some people who were experiencing this atmosphere for the first time. But, they plunged right into the experience.

“It’s pretty crazy, but it’s a lot of fun,” Pope John freshman Julianna Wortz said. “My sisters went here and heard all the stories. But, this is pretty accurate and I like this..”

As Pope John went on to win by a 32-7 count against Bishop McNamara, the people were happy that their Lions came away with the victory. More importantly, they are looking forward to two weeks from now when they can gather again when the Lions take on Malvern Prep, of Malvern, Pa.

“We’re excited for this,” Corcoran said. “We can’t wait.”