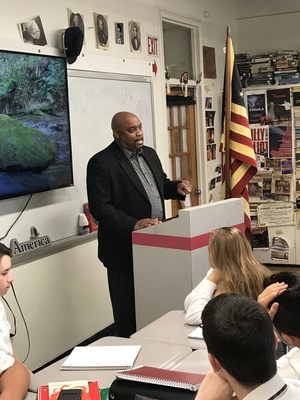 On the 16th anniversary of the September 11th attacks, Terrance Phillips shared his story on what he experienced that day with Mrs. Burt’s U.S. History I and II classes.

SPARTA — When recalling the start of his day on Sept. 11, 2001, Terrance Phillips described it in a way that hit home with every Pope John XXIII Regional High School student in Mrs. Burt’s U.S. History I and II classes listening to him.

“It was like today: a normal day,” Phillips said. “The temperature was perfect, it was picturesque.”

Fortunately and unfortunately, that day changed Phillips’ life — and the lives of millions of people in the U.S. Phillips witnessed first-hand the largest terrorist attack on U.S. soil when two airplanes were hijacked and crashed into the north and south towers of the World Trade Center in New York.

On the 16th anniversary of that tragic day, Phillips shared his story with Mrs. Burt’s U.S. History I and II classes.

Phillips’ appearance as a guest speaker for the classes culminated their “How and Why Study History” portion of the course. During this topic, students had to write a paper that included an interview with a primary source live witness of someone who lived through 9/11.

“I thought his experience was eye-opening,” Pope John junior Louis Montana said. “When you think about it, you don’t understand what was going through peoples’ minds, but he opened me up to that with his story.”

“His story was everything I hoped it would be and more,” said Mrs. Burt, who happened to be going to work in Manhattan on 9/11. “To have the students hear first-hand what he experienced as an employee and from a historical perspective, but what he experienced as a husband, as a father, as a Christian in the aftermath was phenomenal.”

When Phillips got off the train to the World Trade Center, it was shortly after the first plane hit the north tower at 8:46 a.m.

“At that time, I could smell the fumes (from the plane), but didn’t know what it was,” Phillips said. “And I saw people running out of the train station, but that wasn’t abnormal. People normally run up the stairs to go up to their offices.”

But when he made his way up the stairs, Phillips couldn’t believe what he saw.

“Once I came outside, there were hundreds of people outside,” Phillips said. “You looked up and you could see the smoke coming from the north tower.”

Like most people there at that time, Phillips thought it was an accident that the plane hit the tower. As he and the others kept looking up at the tower wondering what happened and how the fire was going to be put out, they heard the sound of the second plane — United Airlines Flight 175 — turning sharply toward the south tower, then smacking into it near the 60th floor.

“At that point, we knew we were under attack,” Phillips said. “The crowd immediately dispersed.”

Phillips said all the people started running toward uptown of Manhattan. During the mass exodus, Phillips fell on the ground, ripped his one pant leg and dropped his Nokia cellphone.

“In my mind, I thought it was over for me,” Phillips said. “I thought I was going to get trampled. All cellular communication was down.”

Phillips managed to get back up and proceed to try to find any place that was transporting people out of the city. Phillips got out of the area before the two towers eventually collapsed.

It took a few hours, but Phillips was able to get on a ferry to go across the Hudson River into New Jersey. He finally made it home to his wife by 8:45 p.m., a few hours after getting in contact with her and saying he was safe.

After this all happened, Phillips said he was able to work with a task force group that Citigroup worked in conjunction with the FBI to find al-Qaeda members who helped coordinate the attacks. Phillips said the events changed a lot of his views, from his view on terrorism to how he wanted to work.

More importantly, it changed his view on life.

“It taught me to never take life for granted,” Phillips said. “I learned to always pray and thank God for his protection, to ask God to see me through the day and protect my family. I learned to appreciate the opportunities around you and the people around you. Try not to leave the house upset with your family because you don’t know what could happen to them. I never knew what was going to happen that day.

“It was a history lesson for me.”

This lesson resonated with the students in the classes, especially Montana and Phillips’ daughter, Madisyn, a Pope John sophomore. Madisyn, who was not born yet when the attacks happened, has heard her father’s story a number of times but was still intrigued by it on Monday.

“It was nice that he was able to share his story,” Madisyn said. “It was interesting to hear it from his perspective as a student and hearing some things I didn’t know about.”

Madisyn even asked her father a question when he opened it up to the class, asking, “What would you have done differently that day?”

Phillips’ response: “I don’t think I prayed before I left home that day. But as a Christian, I still believe God protects us. I mentioned how it changed my life from that standpoint. So, I wish I had prayed for more protection on that day.”

For Montana, Phillips’ story helped him gain more appreciation for his father, who was a first responder at the attacks.

“My father told me he saw all this happen and Mr. Phillips said the same thing,” Montana said. “Mr. Phillips reminded us to love your parents and leave the house happy with them. It makes a lot of sense because you don’t know if they are going to come home or not.”