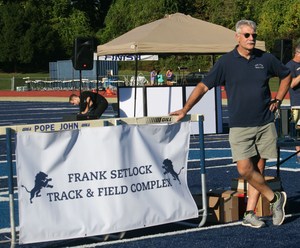 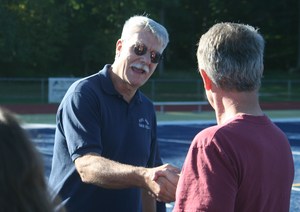 On Saturday morning, Pope John honored Mr. Setlock for all his service he put into the program his 43 years as a faculty member for the school by dedicating its track and field in his name — the Frank Setlock Track & Field Complex — during the school's 5K Spirit Run/Fun Run.

SPARTA — Frank Setlock had one thought running through his mind when he took over the boys track and field program at Pope John XXIII Regional High School 43 years ago.

“What have I done?” Mr. Setlock recalled.

That’s because the Lions were non-existent in the sport. Heck, the school didn’t even have a track or a field to practice or compete on.

But, that didn’t stop Mr. Setlock from trying to build the program. For 24 seasons, Setlock devoted his time and passion for the sport to the Lions and turned them into one of the best programs in the state.

On Saturday morning, Pope John honored Mr. Setlock for all his service he put into the program his 43 years as a faculty member for the school by dedicating its track and field in his name — the Frank Setlock Track & Field Complex — during the school's 5K Spirit Run/Fun Run.

“It’s a great honor,” Mr. Setlock said. “Being the head coach for 24 years and starting with nothing, running on the roads, only having four hurdles to use, and not having a track, the program has come a long way. But, it was the dedication of the kids, the administration like Father McHugh and Father Gacquin before him, and everyone else that helped make this program and this moment happen.”

“This was more than being the track and field coach. It's about his legacy of 43 years of inspiring and encouraging students. And above all, his commitment to Pope John and the values it espouses.”

Before Mr. Setlock became head coach for the 1975-76 school year, the Lions had four different coaches guiding the boys program since the school formed it in 1967. When he was hired, Mr. Setlock knew he had to find alternative ways to get his athletes trained so they could compete at a high level.

“The early years were very difficult,” Mr. Setlock said. “Back in those days, our practices would run from 3:30-7 because we couldn’t use Sparta High School’s track until after 6 p.m. So, we would practice here, we would practice in St. Paul’s Abbey in Andover on the blacktop driveway or run through the fields, and a couple years later we would practice at St. Francis, which is now the Bodhi Monastery in Andover.”

While the workouts for those places were incredibly tough and his former athletes would “hate” them, Mr. Setlock said their dedication was off the charts, which made him want to succeed just as much.

“The kids were the team,” Mr. Setlock said. “They made the sacrifices to do all that work. When we were a team, we rose to the occasion. Sure, we had one or two great kids, but they are not going to win you track meets. You need everyone to contribute; you need kids on the sidelines cheering.

“That was the big difference.”

While it was the Lions who earned these results mostly without the benefit of a home track until the late 1990s, past alumni such as 2001 graduate George Peterson felt Mr. Setlock had the perfect blend of fun and seriousness.

“He always brought that light-fun mood and gave good jabs to everyone,” said Peterson, who was a sprinter on Mr. Setlock’s last two boys teams that won back-to-back SCIL Festival titles. “And when you are young athletes still trying to gain confidence, it was a good environment to be in.”

Though he hasn’t been a head coach for 18 years, Mr. Setlock still helps mold the minds of Pope John students as a science teacher and helps out in the technology department. But, he was happy to see this type of recognition take place for the school, the program and himself.