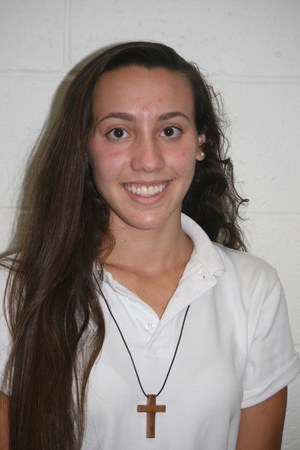 Caroline Morris is one of approximately 16,000 semifinalists competing to become a finalist for the title of Merit Scholar, as announced by the National Merit Scholarship Corporation.

“I’m really happy about it,” Morris said. “I’ve studied and put in a lot of work to earn this. I’m proud of myself.”

“We are thrilled to find out that she is a National Merit Scholarship Program semifinalist,” Pope John XXIII Regional High School President and Principal Father McHugh said. “We are very thankful for her intelligence that she has brought to the academic scene here. She is an ‘Honor to the Father.’”

Morris earned her semifinal spot after competing in a pool of 1.6 million juniors across the country by taking the 2016 Preliminary SAT/National Merit Scholarship Qualifying Test and scoring one of the highest marks in New Jersey. The number of semifinalists in a state “is proportional to the state’s percentage of the national total of graduating seniors,” according to NMSC.

Morris was so thrilled to earn it because of what she had to go through during the fall of 2016 to perform well on the test.

“Last year when I was preparing for and taking the exam, it was really crazy,” Morris said. “I was playing volleyball at the time and I would be in school until at least 5:30 p.m. or later at night plus I was taking four classes.”

Now that she is in this spot, Morris has started the next step toward becoming a finalist. To become a finalist, NMSC says Morris and Pope John “must submit a detailed scholarship application, in which they provide information about Morris’ academic record, participation in school and community events, demonstrated leadership abilities, employment, and honors and awards received.”

Morris has an impressive resume to date.

Morris has also played volleyball, ice hockey and girls lacrosse for Pope John. In addition, she has volunteered at Skylands Ice World as a referee for hockey and has been a youth coach for the sport.

As far as awards, she has earned Distinguished Honors, the SAT 1400 club award, an AP World History award and an AP English Literature award.

Morris hopes her credentials can also get her into either Georgia Tech or Rice University, where she would like to study biomedical engineering and hopefully work in developing prosthetics.

One thing for sure is that she is humbled to be in this position.

“I’m really happy,” Morris said. “All of my hard work is paying off.”