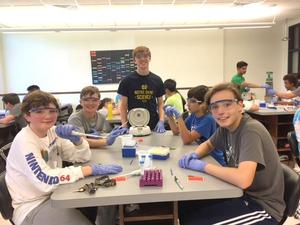 The eighth grade student was a part of a group of rising eighth and ninth grade students who got a chance to be exposed to different types of scientific experiments that will allow identification in areas of biology.

SPARTA — Wesley Taylor may be an eighth grade student and look like one.

But, the Pope John XXIII Regional High School student is doing things beyond his years.

This past summer, Taylor participated in the DNA Learning Center Summer Camp at the University of Notre Dame in South Bend, Ind. At the camp, Taylor was a part of a group of rising eighth and ninth grade students who got a chance to be exposed to different types of scientific experiments that will allow identification in areas of biology.

Taylor has always been an exceptional student, as he has achieved mostly As while attending Pope John XXIII Middle School and Reverend George A. Brown Memorial School during his academic career.

During his time at the middle school, Taylor took an advanced pre-algebra class and it was through his teacher, Mr. George Becker, that he found out about the DNA camp at Notre Dame.

“He has a quick mind, absorbs new concepts quickly and thoroughly, and is very inquisitive and curious,” Becker said. “I am a Notre Dame alum and still very involved with the University so I was aware of this program, and (Pope John XXIII Middle School Principal) Susan Santore and I suggested it to him and Wes' parents. They embraced the opportunity.”

Taylor sure did make the most of his time at the camp in South Bend.

Out of all the experiments, Taylor liked testing food for genetically modified crops. During the experiment, he tested a French fry.

“It wasn’t GMO, but I thought it was cool to see whether or not I was eating healthy and if it was chemically altered,” Taylor said.

In addition, Taylor got a chance to experience what it was like to live in a dorm on Notre Dame’s campus and participate in other activities while staying there.

Taylor believes these experiences will benefit him as he progresses in his eighth grade year at Pope John, in his high school years and eventually his college years.

“I can take the lab experience and use it,” Taylor said.  “If we ever test DNA here, I know how to do it. It was awesome to go to this camp. I’ll always remember this trip.”