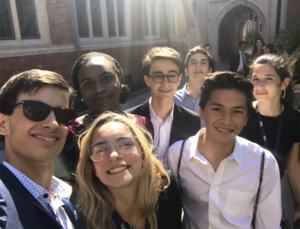 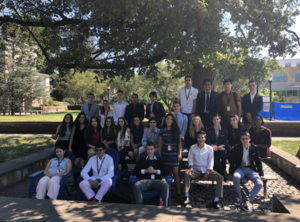 Zachary Moser could have done a lot of things this summer. Yet, for two weeks in July during his time off from school, the Pope John sophomore managed to attend the Yale Summer Academy at Yale University.

SPARTA — Zachary Moser could have done a lot of things this summer.

The Pope John XXIII Regional High School sophomore could have spent his time going to the beach, hanging out with friends, playing sports, working out in a gym, watching TV and the like.

Yet, for two weeks in July during his time off from school, Moser managed to attend the Yale Summer Academy at Yale University. The program, which is run in conjunction with a company called Julian Krinsky Camps & Programs, is “an immersive, innovative academic experience for high school students, designed to develop the next generation’s top thinkers and change-makers,” according to the company’s website.

“It was a great program,” Moser said. “It gave a sense of what the world is like and what college will be like. It helped give me the vision that I want for myself when I get to college.”

For Moser, this was the second straight year that he participated in a similar program. Last year as a rising freshman, he went to Villanova University, but he said the experience was more of “a general feel” for how college works.

At the program at Yale, though, Moser got to spend his time “applying interdisciplinary knowledge and reasoning to mission-minded planning” while working with a group of fellow high school students. In doing so, they covered topics such as economics, political science, environmental science, communications and technology.

Out of all the topics, he felt that economics was something that struck his interest.

“I liked economics, seeing how supply and demand works and how it is applied to different fields such as air filters, filtration devices and other things like that,” Moser said. “It gave me a sense of the major.”

He also liked the diversity of students who were enrolled in the program.

“The people that went were from all over the world,” Moser said. “It was fun to see us all interacting.  We would work in groups of seven, use what we learned in the classes and create projects together. It was amazing that in about two weeks how close we got working with each other, living together and playing together, even though we come from different backgrounds.”

Moser believes this experience — something he felt he could not have done without the help of his parents, George and Ann Moser — will benefit him as he progresses throughout his academic career at Pope John.

“It showed me why it is important to work hard in high school,” Moser said. “If you have passion for something, you have to give it your all to achieve it.”